During WWII, a passenger aircraft is shot down by a German JU-88 squadron off the coast of Cedeira, in the northwest of Spain. There are no survivors.

A famous name features on the passenger list: Leslie Howard. Was he the target?  They say he was a Jew, an anti-nazi propagandist, or perhaps a spy… As is often the case, history is written with forgotten fragments.

This is what may or may not have been the story behind Leslie Howard’s last journey.

On the first of June, 1943, an aerial incident occurred off the Galician coast.  Flight 777, a passenger aircraft on the Lisbon – Bristol route, was attacked by German fighters. The plane was brought down, falling into the sea with no survivors. It was a common type of incident in the Second World War, but not just one of many. It had a great impact and, even today, there is much speculation about what was behind it. Among the passengers were Tyrrell Mildmay Shervington (head of the Secret Service in Lisbon and director of the Shell company), Wilfrid B. Israel (director of the London Jewish Agency), Ivan James Sharp (in charge of a mission to buy wolfram), as well as the famous British actor, Leslie Howard.

Leslie’s Journey is a documentary which proposes an investigation into the details of this tragic event. Leslie Howard met his death on his way back to his native London after a conference tour of Lisbon and Madrid. A few hours before boarding the flight, he dined in Lisbon with his assistant, Alfred T. Chenhalls, and his cousin, Helen Girvin Balfour Gerassi. Helen was left feeling that Leslie, apart from his work as an actor and lecturer, was hiding something.

There are several theories concerning the real reasons behind Leslie´s visit to Spain, reasons that may have been crucial in provoking the German attack which prevented his return home. Was Leslie involved in a secret mission to transmit to Franco a request for neutrality in the war? His old flame, Conchita Montenegro, given her known close relations with the Falange hierarchy, may have acted as intermediary between the actor and the dictator. Might his friend and representative Alfred T. Chenhalls have been confused with Churchill, given their physical similarity? Was the airplane an interesting target simply because of all the notable people on board, or was it really just an accident?

To answer these questions, Leslie’s last days become especially important, as he becomes the star of his own story. He is accompanied on his journey by an impressive supporting cast: as well as Conchita Montenegro, also taking part were famous Hollywood celebrities such as Humphrey Bogart, Bette Davis, Ingrid Bergman or Clark Gable. Franco also has his role in the documentary, which mixes cinema, politics, action and intrigue. He isn’t the only leader with an important role. The British Prime Minister Winston Churchill, the German dictator Adolf Hitler, or the minister Joseph Goebbels, also have their part to play. Leslie’s Journey brings together this peculiar cast for the first time, and does it thanks to the use of films, newsreels and publicity from the time, using reassembly so that the protagonists, as if in a collage, tell the story themselves.

Leslie’s Journey looks for answers to the mystery of Leslie Howard’s death, diving into a story of intrigue and glamour.  As is often the case, history is written with forgotten fragments. This is what may or may not have been the story behind Leslie Howard’s last journey 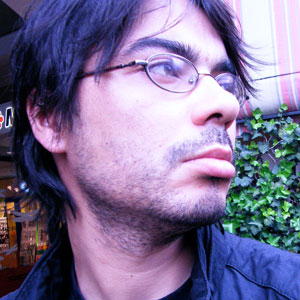 Filmmaker and script writer whose work has been focused on documentary and experimentation.  He began his career in 2001 as a script writer on TV series such as “Mareas Vivas” and “Terra de Miranda”, until in 2003 he started as a director of documentaries with “Carcamáns”, the story of the Prestige catastrophe in the Arousa estuary. From then on he begins to develop a career as a director in which he stands out especially for his use of preexisting material, be it cinematic or static, as a way of developing new languages.  Author of more than a dozen titles, some of which such as “JEDN” (2006) or “Radiografía dun autor de tebeos” (2010) have been screened in Cervantes Institutes around the world, including Sao Paulo, New York, Istanbul, Naples or Manchester as well as in festivals such as Silver Docs, SIFF Seattle or Malaga Film Festival. His name is associated with “Novo Cinema Galego” (New Galician Cinema), which groups together a series of Galician creators who have in common creations which break new ground with conventional audiovisual production. His first full length film, “La Brecha” (2012), premiered in the prestigious Buenos Aires International Festival of Independent Cinema, BAFICI. Leslie’s Journey (2014) is his second full length film.

When I was offered the chance to direct a project called Leslie’s Journey, there was a premise: we were talking about an historic event. This premise was Leslie Howard’s tragic death in an aerial attack, over which doubt still remains whether it was deliberate, or an accident. We knew right from the start that we would be moving on speculative ground, and by centering on this specific act we could offer the viewer little more than the development of certain theories revolving around the Nazi attack on Leslie Howard’s plane. Thus the idea was clear, we would be unable to reach a clear conclusion to the story and so the aim with “Leslies Journey” was offer the viewer a way to enjoy the story.

With this staring point and the storyline written by Daniela Arias-Andreu and Pepe Coira, the project was leading towards a sort of “Hero’s journey”, his rise and fall, although accompanied by a certain air of detective story, following clues and formulating hypotheses about what might have happened to that plane and the reasons behind it.

From my point of view, at the beginning the narration of the story is of relative importance. I concentrate on the means at my disposal to tell the story and not so much on the story itself. And in this case I found myself in a quandary. On one hand, I knew I could count on some of Leslie Howard’s films and that these films would be perhaps the only images of the actor available to me. Images from fiction, where Leslie Howard would not be himself but the role he was portraying. On the other hand, the complexity of telling a story of the past from the present, which always conditions el conditions the discourse. Talking of the past means making alluding to events impossible to tell with images, making it necessary to include a narrative to explain them, or the use of other resources, such as interviews, on which to build the story.  The use of these resources implies that the story is no longer “contemplated” but “heard”, and there are great differences between what you can “see” over what someone tells you.

Taking this into account, I started by watching Leslie Howard’s films, looking for the shots, dialogues and sequences which, taken out of context, could fit into the storyline and start to re-edit them. It was a first step and, despite the sequences not being well strung together and their lack of continuity, we could tell we were on to something. We had a protagonist who would have a strong presence throughout the film and much of what we had to tell would be told through him. At that moment, the accident itself began to somewhat lose importance, while Leslie himself gained prominence.

The next step was to give these re-edited sequences of Leslie’s films a new context. One of the great attractions of the storyline is the historic importance of Leslie’s times. He lived through the interwar years, fought in the first World War, saw his son fight in the Second, he was on Broadway, lived through Hollywood’s Golden Age, the birth of the great film studios and so on. This historical context helps the viewer understand and sympathize with Leslie’s figure.

As soon as those first decontextualized sequences were put into a new context, the film started to make sense.  I started to think about the idea of history and in the changeable part of history. I thought of what Ryszard Kapuscinski said about the media, that there existed “reality” and then “reality projected through the media, and that, in some way, our film was in itself a new historic account created from small fragments of “projected realities”.

After previewing a first cut of some 40 minutes in “Portocabo”, we decided that this was the film, and that the documentary project which spoke of Leslie Howard’s death was to become a reassembled film where, through Leslie Howard’s life, we would take our own journey through Europe’s recent history and the beginnings of the American film industry.

The challenge then was to make a film under the limits of using nothing but archive material, and which could emulate a classic film from the 30s or 40s.  Normally it is characteristic of reassembled films to be excessively fragmented, because of the raw material, and I wanted to avoid this at all cost as far as I could. The film was to be narrated in three acts, would have protagonists and antagonists, use the stylistic resources of the time, such as the cross-dissolve or the voice-over and become a narrative unit in its own right even when composed of hundreds of pieces of raw material from diverse sources and years.

Between them, Daniela Arias-Andreu and Manuel López-Benito began an arduous search for period material which could be useful for our ends, and after several months (I don’t know how many it could have been) the film was complete and its shape defined.

At the end, when it was time for me to write the script for the voiceover which would guide the story, the first thing that came to mind was how vulnerable our memory is, and therefore our own tales of history, and as our memory fades how we fill in the gaps with little pieces of fiction that represent what one day might have been but perhaps never was. In that way, all the theories that have built up around Leslie Howard’s death are part of that which we no longer know, that which may be real or fictional, and which, in essence, a part of the life of a man whose profession was as an actor, adopting other people’s identities.

“Leslie’s Journey” became a film with a huge playful component where all of us who took part started to play with history, mixing fiction and reality, and at the same time it’s an invitation to anyone who watches it to play too.

Portocabo is a production company founded in 2010, with a clear international vocation. Portocabo’s productions are aimed at the Galician, Spanish and international markets, especially in two areas:

Notable amongst the latest productions by Portocabo are the The Avatars (52×23’), a series set in new York but filmed in Madrid in English and broadcast in Italy; Luci (26×25′), a single camera sitcom for Galician TV whose adaptation rights have just been sold for the American market; La Revoltosa (26×55′), a comedy for Canary Islands TV and Gran Nord (26×55′), dramedy for TV3 of Catalonia.

Galegos no mundo (78×55′) is the documentary series, for Galician TV, with which Portocabo got underway, and which, three years later, is still going strong.

With a grant from